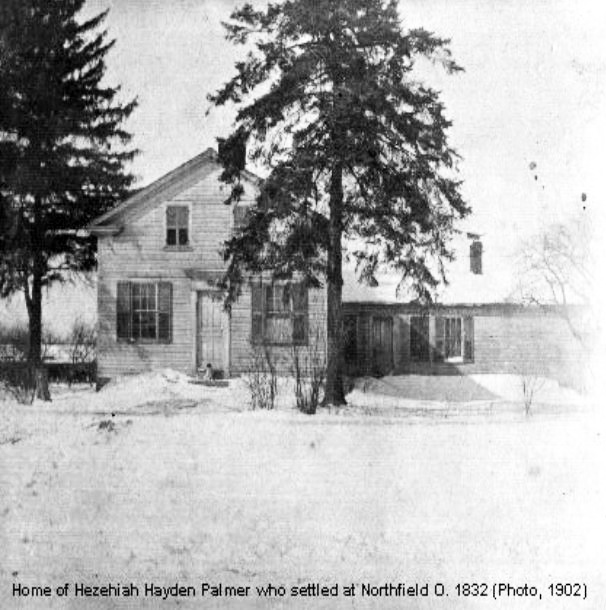 Dear Arch:
When David Thomas called last week, it really motivated me to get busy and gather together an album or notebook about the Palmer family. Back in 1984 I worked with my aunt and we published an Alden Genealogy (back to the Mayflower) that my grandmother had begun to compile before her death. The Palmers were included in it as Anson Palmer married an Alden.

I wrote out an outline on Sunday of the material that I hope to be sending to you. And the compiling of photos and information has started!

One of the things that I have struggled with and haven't known how to handle it since our visit to the Palmer House in May, was that the information that the HSON has put out states that this house was William Palmer's. After doing some more searching, I believe that Hezekiah Palmer built the home, sold the land & the house to William after that and possibly both families lived together after William was married in 1849.

Here are the reasons I have for holding this hypothesis:

1. My grandmother -- Edith Palmer Sears -- apparently visited with her father Anson H. Palmer (grandson of Hezekiah, son of Horace) in February 1902. I have in my possession, the photo album in which she recorded their visit. She has a picture of the "Palmer House" as it is known today and under it she has recorded "Home of Hezekiah Hayden Palmer who settled at Northfield O. 1832." Why would she have labeled it this way had it only been William's? With Anson having grown up in Northfield and coming to Iowa as a young adult, wouldn't he have been a reliable source of where his grandparents had lived?

2. In an article about Mrs. Emeline Bliss which, I think, was published in the History of Summit Co., OH, page 612, it states "He (Hezekiah) built the first log house at the center of Northfield, in the woods, which in a few years was replaced by the frame house. Here the parents spent the remainder of their lives." Also, in that same article, it states that "Miss Emeline Palmer, the second child and daughter, was married in a log house at Northfield May 9, 1839, to Ambrose William Bliss...." To me that is saying the Hezekiah was still living in the log cabin in 1839, the present "Palmer House" was built after that and that Hezekiah and Abigail lived there. Am I putting the pieces of the puzzle together correctly?

3. Another piece of information that I think may enter into it is the fact that William died in 1859, according to records at the cemetery and he had twin infant daughters who died near the time of his death. That was only 10 years after their marriage. Could have Hezekiah and Abigail helped raise their granddaughter, Helen? Do you have any record of Hezekiah & Abigail's deaths? Were there records kept back in the 1840 & 1850s of deaths. I need to go down to Des Moines (has both the State Historical Library and the Iowa Genealogical Library) one of these times and check out the census records for 1850 & 1860 and see if that might clear some things up.

This photo of the Palmer House was taken by Edith Palmer in February of 1902, when she and her father, Anson H. Palmer, visited Northfield, Ohio from Newburg, Iowa. In Edith's photo album , Edith wrote under the picture, Home of Hezekiah Hayden Palmer who settled at Northfield O. 1832. Hezekiah and Abilgail Taylor Palmer built the first house in Northfield Center, a round log cabin. The log cabin was replaced by this framed house in about 1844.Here the parents spent the reminder of their lives.  (History of Summit Co., p 612)

Hezekiah sold the land on which the house was located to William, his son. William was married 11/15/1849 to Amelia Whitney. Since Hezekiah & Abigail's dates of death are not known, it may have been that both couples lived together for a period of time. It remained in the Palmer family until William's daughter, Helen Palmer, sold it to Lew and Sara Dalrymple in 1903.

In 1915 it was sold to the school district which still holds title to it. The house was moved to its present location to take way for a new grade school being built. The north wing, a kitchen, was removed.

Since 1965 the Board of Education has permitted the Historical Society of Olde Northfield to house a museum there.