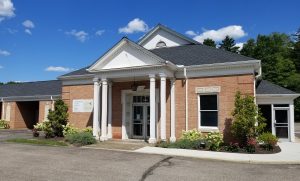 The purpose of this page will be to update our residents regarding developments with our township buildings and properties, particularly the upcoming November ballot issue.

Why is the Township considering moving out of the current Town Hall?

During a public forum in late May of this year, which was attended by 50 residents, the Township administrator highlighted the issues with the current structure.  The main concerns include the following:

As can be seen from the above, it is not a single factor that has contributed to the trustees' collective decision to seek other potential facilities.  Rather, the decision was derived from the above concerns, coupled with the fact that estimates for renovation of the existing Town Hall have run as high as $1,000,000.

Why is the Township considering purchasing the old bank building, at 9447 Olde Eight Road, to be used as the town hall facility?

There are a number of factors that make 9447 Olde Eight Road an attractive, potential town hall facility.

Will the old bank building have sufficient space for township operations and community activities?

The Old Bank Building has more than 6,000 square feet of usable space between its two levels.  See the dimensioned floor plans here:

Why doesn't the Township simply renovate the existing Town Hall?

As indicated above, the potential cost of renovating the existing Town Hall could run as high as $1,000,000.  Even with this cost, the current facility would still not, necessarily, meet the functional and operational needs of the Township.  There are additional costs that are not factored into the cost of renovation, including relocating staff to another facility while the work is being completed.

What does the Township intend to do with the current Town Hall, if they purchase the old bank building?

The trustees recognize that the current Town Hall is an iconic structure of the Township.  While, they have concluded that it is no longer functional as a town hall facility, they desire to see it re-purposed.  A number of potential uses for the facility, which would retain its historic character, are being discussed.  The goal of the trustees is to see the structure retained and re-purposed.

Does the Township need to do a ballot issue to purchase the old bank building?

The Township purposefully operates on a very limited budget, particularly when compared to other regional government entities.  Over 83% of the revenue the Township receives directly from our residents, through tax levies, is earmarked for providing specific services (road and bridge repair and maintenance and fire and safety services).  As such, in order to be able to purchase the bank building, the Township needs to pass a nominal bond issue, intended solely for the purchase of 9447 Olde Eight Road.  Since the trustees desire to minimize the fiscal burden on the Township's residents, they decided to only include the town hall purchase, and not the fire station construction, in the ballot issue.  The total loan amount, therefore, will be $1.4 million.

When will the bond issue/levy be on the ballot?

This levy issue will be included on the ballot for the November 5, 2019 General Election.

What does a bond amount of $1.4 million translate into as a cost for each household?  In other words, what will I be paying if the bond issue passes?

Are you seeking a permanent levy?  In other words, will I always have to pay the additional taxes for the purchase of the bank building?

No.  This levy is only for the life of the loan used to purchase 9447 Olde Eight.  The maximum length of the loan is 30 years.

What is the contingency plan if the bond issue/levy does not pass in November?

If the bond issue were to not pass this November, the Township would, likely, have to go back to the voters next year to secure permission to either construct a new facility or make large-scale renovations to the existing Town Hall.  The Ohio Revised Code requires voter approval before a Township can do more than $50,000 in repairs or improvements to a town hall.  This would not be a remotely ideal situation, given that staff and residents would continue to deal with the considerable issues inherent to the current Town Hall for AT LEAST an additional 14 months.  In addition, simply renovating the current Town Hall will carry with it a number of other costs that haven't been factored in, including relocating staff while the work is being completed.

The other concern is that the Ohio Revised Code only allows 7 years to finance the cost of town hall renovations or construction.  The ORC allows a township 30 years to pay for the cost of purchase of an existing structure.  That would increase the annual household cost considerably (given the shorter financing timeline).

If the $1.4 million is for the purchase of the bank, where are the funds coming from to build out the bank? As you said, it is a "blank canvas". I know it is in a white box state where studs are exposed and there are no finishes within the building.

The $1.4 million incorporates all of the funds we will need to purchase the building as an improved/finished structure (with all required finishes included).  The building will be completely turn-key at the time of the sale/transfer.

Would CPK Construction (direct relationship to current building owner) be awarded the contract to complete the improvements as a condition of the sale or would a traditional bid process be executed?

As the seller, who would, ultimately, be providing us a finished, completely improved structure, Chris Kontur will, of course, be utilizing his company, CPK Construction, to do the improvements.  Given that we will be purchasing a particular, improved structure, no separate bid process for the improvement portion is needed.  If we were buying the structure unimproved, then, yes, we would need to bid out the construction of improvements.  Our research has indicated that purchasing the structure improved will save money over purchasing the unfinished structure and then going out to bid for and hiring a design architect and a construction firm.

What other options has the Township considered?

The trustees considered a number of other potential options, including renovation of the existing town hall and construction of a new, single floor facility, before determining that the purchase of 9447 Olde Eight was the most viable option.  The fact that the Township can spread the cost of financing this option over 30 years (as opposed to 7 years for renovation and new construction), will lower the annual household cost for residents.

Were the town hall facility options considered in public meetings?

The trustees considered the various options in a series of public meetings, including:

Why is the Township considering purchasing a building that was vacant for some time?

Commercial properties, with the exception of prime office space, often stay on the market for a much longer period of time, given their highly specialized, niche purposes.  The old bank building, in addition, had previously experienced some flooding issues, which have been completely remedied through full perimeter waterproofing and the installation of an industrial pumping  system (basically, a pair of large sump pumps).  Given the fact that the water issues have been remedied, coupled with the suitability of the structure as a government building/town hall, Township officials are confident that the bank building will, ultimately, meet their needs and the needs of the community.

Why has the Township reacted as it has to situations that are perceived to not be immediately dangerous (such as the concerns surrounding pathogenic mold)?

Staff and resident health and safety are top priorities for the Township.  While pathogenic mold does not substantially impact most healthy people negatively, it does have the potential to cause considerable harm to people who experience allergic reactions to mold spores AND to people who are dealing with immune system issues.  Given that the Town Hall is a public facility, we want to make it safe for EVERYONE, not just people who, we assume, would not have a negative reaction to mold.  To proceed as if pathogenic mold does not have the potential to cause harm, simply because MOST people wouldn't be affected, would be wildly irresponsible.

Will the Township be hosting additional public forum events to communicate information regarding the ballot/levy issue?

Absolutely, it is important to us that we educate our residents fully regarding the November 5th ballot issue.  As such, we will be offering three public forum sessions.  They have been scheduled in such a way as to afford the vast majority of residents, regardless of their work schedules, an opportunity to attend, gather information, and ask questions.  The final Public Forum event, which will be held in the Fenton Room of the Nordonia Hills Branch Library, is scheduled for: